Susan Sarandon is an outspoken liberal who has once again generated controversy with a statement. 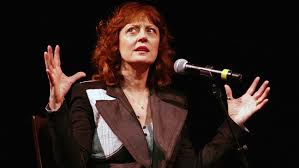 During an interview over the weekend at the Hamptons Film Festival, the Oscar winner talked about sending a copy of the book "Dead Man Walking" to the pope and said: "The last one [Pope John Paul II], not this Nazi one we have now.”

Of course, it has come out that Pope Benedict actually was a member of the Hitler Youth party as a child, something required of boys his age at the time. But reps made it clear he never had any "active participation" in the group.

Sarandon drew laughter from the crowd at the event when she dropped this N word in reference to the pope a second time.

Bill Donohue, president of the Catholic League for Religious and Civil Rights, says Sarandon is "a despicable person" who "doesn't know what she's talking about" when it comes to the pope's past.