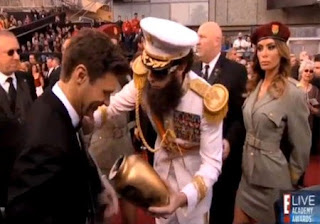 Sacha Baron Cohen through his "Dictator" persona has caused chaos on the Oscars red carpet, following a legendary face-off with the Academy over his attendance in full military garb.

It all appeared to be going so good. General Admiral Aladeen aka Sacha Baron Cohen was happily giving red carpet host Ryan Seacrest details about his red carpet outfit:

"Hello Death to the West, I'm wearing John Galliano, with socks by K-Mart. As my friend Saddam Hussein once said to me, socks are socks. Don’t waste money."


But there was an ominous urn in his hands, with the face of North Korean late dictator Kim Jong-il on the front. And so the Dictator carried on:
"It gave me an opportunity to bring my dear friend and double standards partner Kim Jong-il - it was his dream to come to the Oscars and be spread over the red carpet and Halle Berry’s chest again..."


And then it all went haywire, as the Dictator appeared to trip, and the contents of the urn - about a hundred ashtrays' worth of powder, later reported to be likely to be pancake mix - went all over the thousand-dollar Burberry suit of a mortified Seacrest, who struggled to keep his composure.

The Dictator was unabashed, comforting Seacrest: "You can say you are wearing Kim Jong-il" - before he was unceremoniously bundled off by security.

Seacrest addressed the camera and his co-presenters: "I had a feeling he was up to something, I just didn't know what form it would take..."
Poor Ryan...Sacha is so unpredictably hilarious and spontaneous that makes people to get out of their comfort zone...He just can't help it no matter what his alter ego is!
Labels: Celebrities Cinema