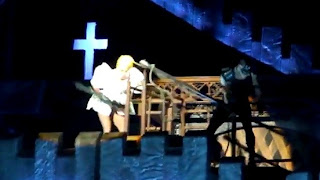 Maybe Lady Gaga's fans should call her Mother Terminator instead of Mother Monster. Lady Gaga proved her mettle on Sunday night during the last of three shows in New Zealand when she was struck in the head with a pole and just kept on singing.

Videos of the incident posted online show a male backup dancer accidentally hitting Gaga in the head with a metal set piece while trying to take move it off the stage. Gaga, who bent down to pick up a prop machine gun during the performance of "Judas," staggered a bit and rubbed her head before briefly walking off the stage. But, a short time later, she was right back at it, performing 16 more songs before calling it a night.

Later in the gig, Lady Gaga told the audience: "I want to apologize. I did hit my head and I think I may have a concussion. But don't you worry, I will finish this show." 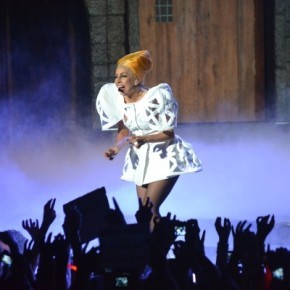 It has to be noted that Lady Gaga's make-up artist, Tara Savelo, tweeted about the incident on Sunday, writing: "Gaga has a concussion but she is going to be okay. She wants u to know she loves u. I'm taking care of her. Can't believe she finished the show."

We can't beleive it too!

Lady Gaga proved her professionalism. It  was undoubtedly a big hit! Thumbs up Gaga! Hope this won't happen again!