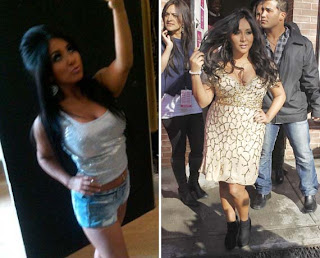 Snooki loses weight and of course she is so proud of herself  that she plans on rewarding herself with an unconventional treat...Wonder what Snooki has in mind? Breast augmentation!

"All I want for Christmas is big knockers like @JENNIWOWW. Thanks Santa," Snooki wrote on her pal's Twitter page. 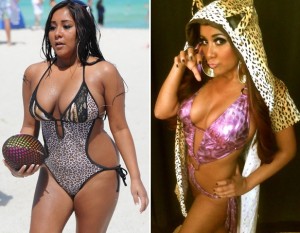 "I'd do it every year if I could!" she told Harper's Bazaar.
Her pal has decided to reward herself with a similar experience for reaching her weight loss goals.


"So happy I'm at my goal weight I was when I was in high school!" she tweeted. "Feelin fit is amazing and can't wait to tone up hardcore!"

She then added that she's "closer to her weight loss goal of 98 lbs." 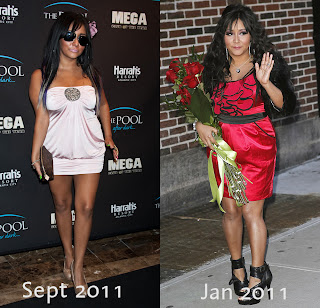 It's more than clear that Snooki has left all the hard partying lifestyle and now spends less time in the bars and more at the gym.


In fact, she even tweeted that she was working out on "thirsty Thursday", writing: "Late night gym session!"

Snooki has recently tweeted photos of herself wearing revealing monokinis. The fact that Snooki loses weight has played a significant role in boosting her confidence! 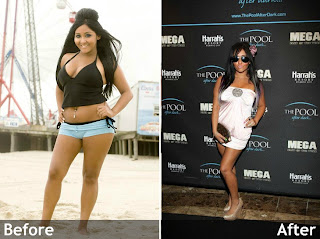 It has to be mentioned that Snooki has embarked on a weight-loss plan, revealing on the "Wendy Williams show", that she has slimmed down to 103lb, just five off her target goal.

Snooki made a statement to "In Touch magazine" that she was sick of celebrity blogs commenting on her weight, but claimed: "I didn't lose weight for them.  I did it for me."

The question is : "How Snooki loses weight?" 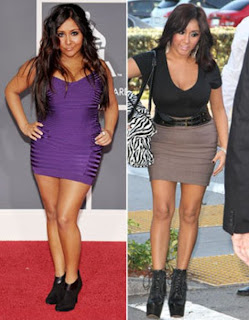 She even took to her Twitter to deny reports that her thin frame was down to taking drops of the controversial Human Chorionic Gonadotropin (HGC) hormone.

She tweeted: "Glad to hear reports that say I look good =) but it's not because of HCG! Thanks @Zantrex!"
It has to be said that Zantrex fat burning tablets are apparently also favoured by many celebrities including Britney Spears. 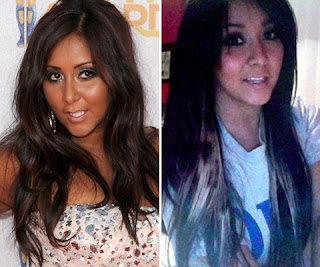 But be aware of the side effects such as palpitations, anxiety, cold sweats, nausea, diarrhoea, increased heart rate and irritability.


Snooki also told "In Touch" that diet and exercise also played a role in her new look.

"When I work out and eat right, I feel healthier and happier," Snooki revealed.

Snooki definitely appears to be significantly thinner in the face, with her jawline more defined. She undeniably reached her goal weight of 98lbs.The good thing is that she hasn't lost her curves!

To be honest, I completely disagree with the use of diet pills for weight loss. Diet pills can be extremely dangerous and can totally destroy somebody's metabolism. So, their use shouldn't be encouraged. Don't forget that Snooki is a celebrity and she gets paid by promoting them. Be also aware that celebrities don't necessarily use the products they advertise. Conclusion: Don't take celebrities' word for granted!