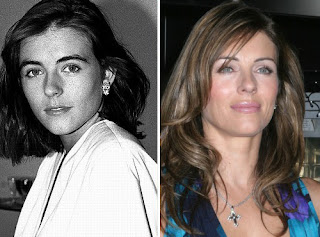 Elizabeth Hurley when she was preparing for her 42nd birthday in 2007 made many people wonder if she had gone under the surgeon's knife. Elizabeth claimed then: "No, but I think I am ready for it. I haven’t had anything done yet." Not even Botox? "No, no. Look I’m frowning. No. I don’t have anything in my face. But I would never rule it out."

Judging by the before and after photos it appears that Elizabeth Hurley had botox injections and maybe a boob job. A few years ago it was already speculated that she had some collagen injected into her lips. They undeniably seem huge and unnatural. 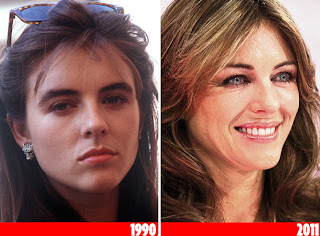 Despite Liz telling "Estee Lauder" : "I’d be too scared to modify my face. Can you imagine if it was worse afterwards? Added to which, in Hollywood any surgical interventions always look so artificial that I can spot them a mile off. I just find it utterly pathetic to have an operation simply to try to make oneself look younger," there is evidence that she had her lips done. 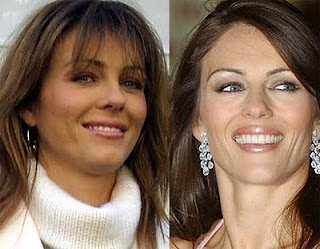 According to plastic surgeon Dr. Lucy Glancey : "She has quite obviously had some sort of enhancement and it looks like this has been achieved with a semi-permanent injection or Restylane, which is similar to collagen but lasts much longer. Her lips look particularly swollen at the moment but this could be because the procedure has just been done. Generally there is excess swelling for up to a week after the injection." 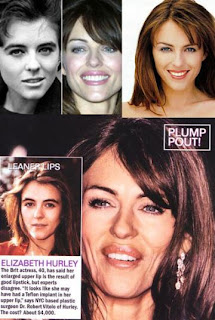 It has to be mentioned that collagen lip injections are temporary, lasting for up to 4-6 months after the procedure. Generally, touch-up treatments are needed two to three times yearly. Doctors can increase the size of the upper or lower lip, reducing the appearance of wrinkles as the patient ages. Sadly, some swelling and slight bruising may occur after the procedure, which is the biggest disadvantage to having the injection done.


Hurley also quoted as saying: "Although Marilyn Monroe was a size 16 and always looked fabulous I’d kill myself if I was that fat." That statement made many people suspicious if whether she had liposuction done or not. Possibly, she had gone under the knife for breast implants. Looking at old photos, you can't help but notice that Hurley's breasts are not that filling into her dress. However, from recent photos,  they appear they are bursting out of there. It is more than obvious that she had botox injections as well. 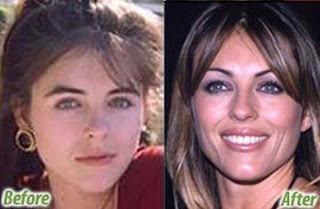 It has to be said that botox is one of the most popular and common treatments among celebrities. It is the best way to keep the wrinkles away. As plastic surgeon experts explain, botox is made from "botulinum toxin", a poison produced by the bacterium Clostridium botulinum. The injection takes place 3-7 days after the procedure. Soreness or mild bruising may occur as a result. 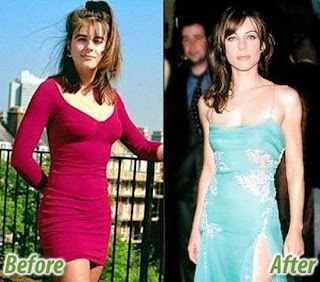 Elizabeth Hurley still insists that she hasn't had any plastic surgery procedure and recently took to Twitter to make a statement.

Elizabeth Hurley wrote in 2010 on Twitter: "I read that I’ve just had breast implants-happy to report still au naturel but I do wear exceptionally well cut bikinis."

You may wonder: " What plastic surgeons think of Elizabeth Hurley's plastic surgery? Has she gone under the knife or not?"

On his blog, OcBody plastic surgeon Dr John Di Saia reports: "I had not read the report to which she refers. Looking at my previous blog posts, she has not been examined on the subject of breast implants. From the images I have seen of Ms Hurley it seems more likely that she hasn’t had breast implant surgery than she has." 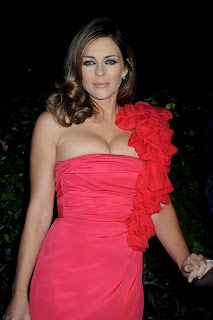 While Elizabeth may indeed be naturally well-endowed, it appears unlikely that she is entirely without plastic surgery. Early pictures of the actress reveal thinner lips and a wider nose, indicating that she may use lip fillers and have had a nose job in the past on her rise to fame.


According to Dr. Paul S. Nassif, a Facial Plastic and Reconstructive Surgeon and Rhinoplasty Specialist in Beverly Hills, Calif.: "It is possible Elizabeth Hurley may have had work performed to her nose and a lip augmentation.  If any work was performed to her face, it was conservative and she does not appear overdone. " 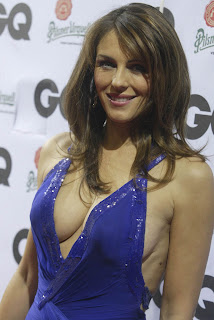 Miami plastic surgeon Dr. Michael Salzhauer quoted as saying: "It does look like Elizabeth Hurley has refined the look of her nose through a Rhinoplasty at some point  giving her a beautiful profile and looks natural and not overdone.  Her lips look like they have been made fuller most likely from use of some dermal fillers."


What do you think of Elizabeth Hurley's plastic surgery?

Is she a natural beauty or not?