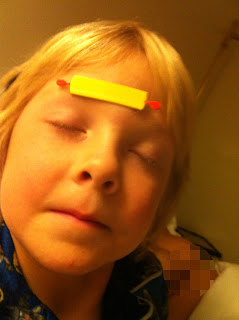 Dean McDermott has learned the hard way on November 17, 2011 after he posted a picture which shows wife Tori Spelling's breasts!

In what appears to be an innocent photo, Dean snapped a shot of their son Liam goofing off in their home, but in the background there are a pair of exposed boobs.

Tori Spelling is looking on the bright side though. Although her husband Dean McDermott accidentally tweeted a topless photo of her that will probably live on the Internet forever, at least he picked the right time to do it. 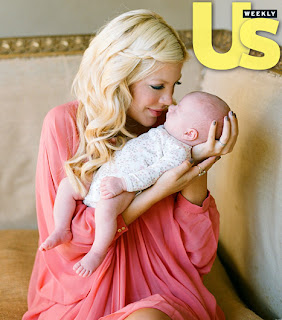 In case you have missed it then, Tori was nursing the family's newest addition, Hattie, when McDermott snapped a photo of the couple's four-year-old son Liam, which also depicted a topless Tori in the background. McDermott sent the photo out to his 80,000 followers before realizing his mistake. Although it's no longer on his Twitter account, it's still on the Web.

"It was a complete accident obviously," McDermott, 45, told CNN. He and Liam were goofing around, putting stickers of rolling pins and pots and pans on their heads and taking photos. "I took a picture (of Liam) and I sent it and I did not see (that) in the background...." 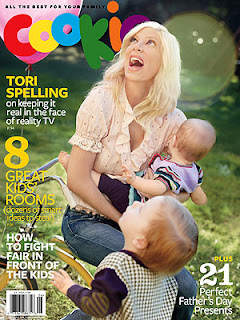 Tori admits that after the photo went out, she "was shocked" and "devastated."

"But it's like, what am I going to do? I am a mom, I was nursing my baby," Tori claims. "(Dean) was so devastated about it that I couldn't be mad. I mean it was genuinely an accident."

Besides, Tori goes on: "If you are ever going to have someone tweet a picture of your boobs, I would rather it happen now than any other time because when you are nursing, your boobs look better than ever, bold (and) beautiful." Tori jokes: "I just had my nipples insured, so yeah, it's good." 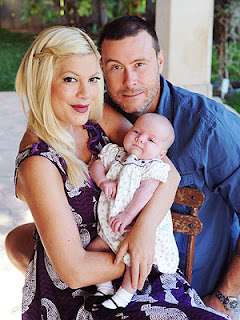 And it's not like the couple isn't used to their private moments being shared, thanks to their Oxygen reality show, "Tori & Dean: Home Sweet Hollywood."

Of working with his family on the series, Dean says: "I would not have it any other way. We work so well together. We hate being apart from each other...I get to go to work with my best friend and my kids."

Tori adds: "It is a great job if you can even call it a job. It's amazing. And when people say like, "Oh you put your kids on a TV show?" It's like, well, there is the option that I could be on a scripted TV series, I could be on a set somewhere 17 hours a day and I could not see my children at all." 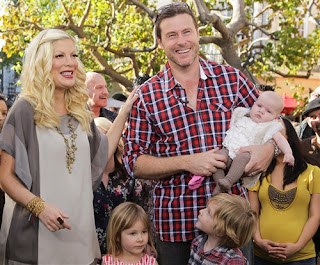 Instead, with a family reality show, "we get to spend our whole day with our kids and just live our lives and there is a camera there sometimes. But they are family as well. It is an easy thing and it is a great thing."