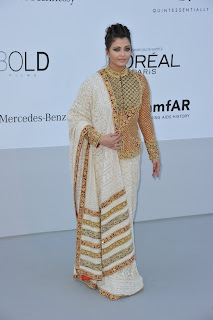 After being slammed by her country for not immediately losing her baby weight like Victoria Beckham, Aishwarya Rai Bachchan stole the red carpet show at the amfAR Cinema Against AIDS bash at the Cannes Film Festival on Thursday night.


Dubbed "the most beautiful woman in the world" by actress Julia Roberts, the 38-year-old, who gave birth to her first daughter 6 months ago, dazzled in a gorgeously embroidered traditional sari designed by Abu Jani and Sandeep Khosla. Flawlessly faced with her hair in a sophisticated updo, the Bollywood actress lived up to her beauty hype. 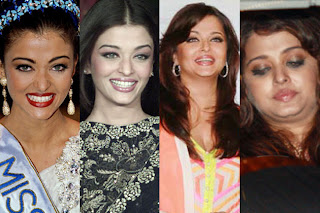 It has to be noted that earlier this month Aishwarya was photographed from an unflattering angle, spawning fans in her homeland to revolt against their beloved actress, calling the photos "shocking" and pointing out her "double chin."

In one video posted on YouTube dubbed "Aishwarya Rai’s Shocking Weight Gain," the former Miss World’s weight gain is chronicled and even features sound bites of an elephant in the background. 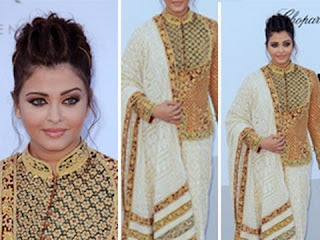 "Aishwarya Rai Bachchan post her pregnancy seems to be looking rather plump instead of losing some of her flab after the baby's delivery," states the description of the video. "The Bachchan bahu seems to be taking motherhood very seriously and seems to have shockingly put on at least five to six kilos."

Looking great is the best revenge! Don't you think?