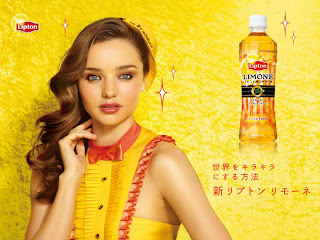 Victoria's Secret model Miranda Kerr would  have probably wished this commercial stay overseas, but thanks to the power of the web, Kerr's hilarious new Lipton Limone spot is available from Japan for your viewing pleasure.

In the Japanese commercials, Miranda, 28, dons a cute yellow waitress uniform and brandishes her Lipton Limone in front of a confused gentleman who appears to have rubbed his piece of cake all over his face and glasses. Why, by the way?


There's also the guy who hands her the drink, who's dressed in a face-obscuring brown robe. There's a reason he's dressed that way... 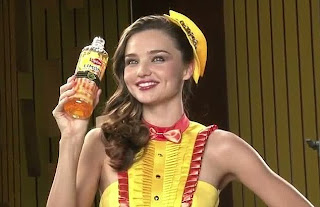 And then comes the ultra-catchy jingle.

We can't put our finger the supermodel is actually singing the recorded version of the song, but in the behind-the-scenes video, she lets a few notes loose ...

What do you think of Miranda Kerr's commercial as well as the behind-the-scenes video?