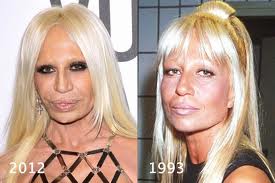 Since taking over for her brother Gianni Versace, there are rumors that famous fashion designer Donatella Versace has gone through some drastic changes thanks to awful plastic surgery, turning herself into a caricature.

To be more exact, rumor has it Donatella has had multiple face lifts as her skin seems far too tight and stretched, numerous nose jobs where some believe at least one went wrong and she also sports the dreaded trout pout where her lips are creepily oversized. 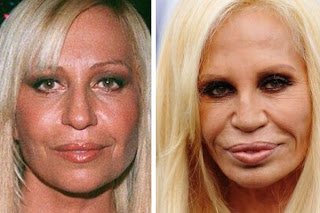 Although nose jobs are usually done to make a nose smaller, it is more than obvious that Donatella’s has grown larger over the years. It is also wider and flatter and slightly crooked, indicating that at least one bad nose job took place. 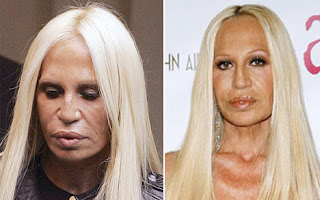 The truth is that Donatella has always had big lips, but you can easily figure out that the oversized upper lip indicates that fillers, like collagen, have been used liberally. 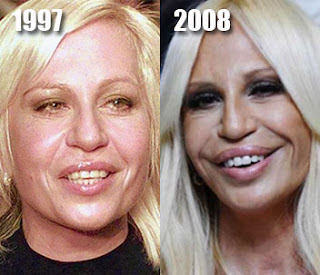 For her age, Donatella’s skin is very firm, indicating a possible facelift. Maybe she uses dermal injectables like Botox to eliminate wrinkles, even when she smiles. Her tight face is a strong contrast to the loose skin on the rest of her body. Not to mention that Donatella’s weight loss also revealed her breast implants. 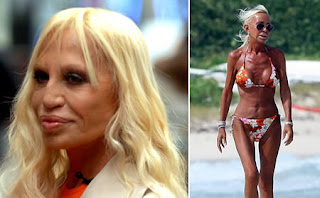 Despite having had several surgeries to delay the signs of ageing, skin experts claim Donatella's love of sunbathing could be her undoing. For example, the deep wrinkles that have appeared on the bridge of Donatella's nose is due to excessive sun damage and simply botched surgery. 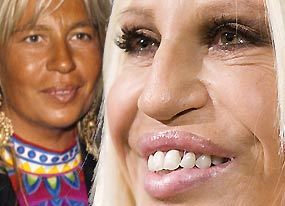 Her full lips now appear even more swollen than usual with deep lines around the mouth. Lip implant(s) undoubtedly has completely changed the shape of her mouth. Unfortunately the change to Donatella’s lips are in no way attractive…

The weird thing is that Donatella has the classic botox forehead, but her entire face is not as well frozen.

You may wonder: "What plastic surgeon experts think of Donatella Versace's surgery?" 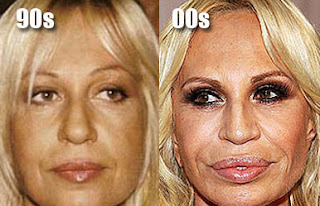 Apostolis Gaitanis, a Harley Street plastic surgeon stated: "This scar tissue on her nose could be due to sunburn as we know she likes the sun a lot. It could also be the result of rhinoplasty that went wrong. This is a definite scar though. I am sure that in the past she has had a face-lift but in this case the face has relaxed again." 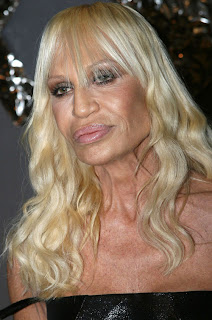 Dr. Paul S. Nassif, a facial plastic and reconstructive surgeon and a rhinoplasty specialist in Beverly Hills, California, claimed:  "Donatella Versace looks as if she has had an over-aggressive rhinoplasty. She most likely has had a facelift and there is some hollowness around her eyes that might be from an aggressive eyelid surgery. Her lips also look over-inflated possibly from an injectable filler." 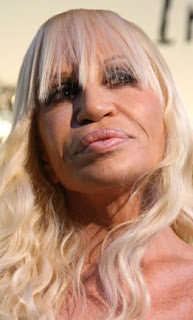 The sad thing is that Donatella Versace has spent a vast fortune in order to improve her looks. The result is that her bad surgery  appears to be showing her years. And more...

Plastic surgeons' advice to Donatella Versace is to stay away from the plastic surgeon's knife and out of the sun.

Should Donatella stop going under the knife before it is too late?