Manny Pacquiao: "I'm Not Against Gay People But Same Sex Marriage Is Against The Law Of God" 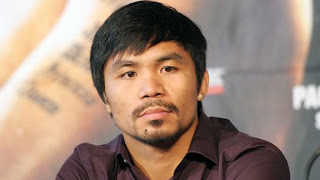 Boxing champion Manny Pacquiao has come out swinging against reports that he made anti-gay comments in a recent interview, stating it was a lie the publication made up.

On Tuesday night reportedly Manny was banned from the celebrity friendly outdoor shopping mall "The Grove" in Los Angeles where he was scheduled to tape an interview with "Extra" host Mario Lopez on Wednesday afternoon. 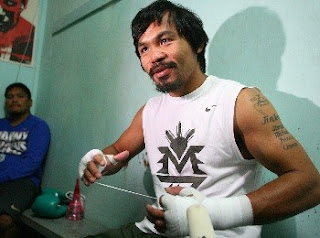 The ban follows a report that he told the "National Conservative Examiner" that he doesn’t agree with President Barack Obama’s support for same sex marriage and was quoted as reciting Bible verse Leviticus 20:13, which says "if a man lies with a man as one lies with a woman, both of them have done what is detestable. They must be put to death; their blood will be on their own heads."

The devout Catholic and Congressman in his homeland of the Philippines is now claiming he did not make the inflammatory comments. 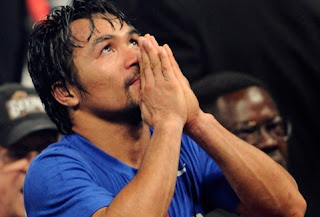 "I didn’t say that, that’s a lie…I didn’t know that quote from Leviticus because I haven’t read the Book of Leviticus yet," Manny quoted as saying.

Pacquiao, the first-ever to win titles in eight different weight classes, continued his explanation: "I’m not against gay people… I have a relative who is also gay. We can’t help it if they were born that way. What I’m critical of are actions that violate the word of God. I only gave out my opinion that same sex marriage is against the law of God."

It has to be noted that "The Grove" posted a Tweet banning the boxer on Tuesday night, writing "Boxer Manny Pacquiao is not welcome @TheGroveLA. @TheGroveLA is a gathering place for all Angelenos, not a place for intolerance."

Mario Lopez hasn’t tweeted an update on Manny’s appearance as of Wednesday morning. 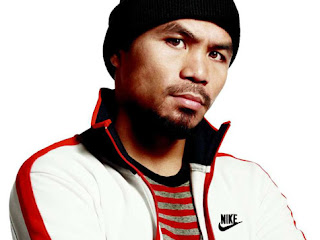 However, Bristol Palin, the outspoken daughter of former Vice Presidential candidate Sarah Palin, who also recently slammed Obama’s support of same sex marriage, was spotted at "The Grove" on February 18, 2012.

Well, I think that Bristol Palin should be banned from "The Grove" as well...As for Manny, it's more than obvious that he is trying to excuse himself . The question is:" What does he mean by "actions that violate the  word of God" and how is he not against gay people if according to him gay people  are not welcome by God? His gay relative is still alive?" This is so far from the truth. God accepts and loves all people in spite of race, color, sexual orientation etc. God is against any kind of discriminations and loves us all unconditionally...Anyway, God makes no mistakes!