Experts claim that Jennifer Aniston has had a major facelift. Sure, her nose was on the bigger side before, but she was just as beautiful then as she is now! 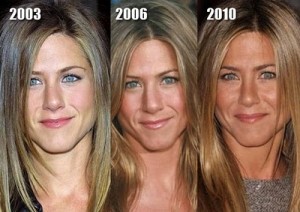 On the other hand, Jennifer Aniston, 42, gives consistent answers when she’s asked about plastic surgery.

No, she hasn’t had it, she says. That doesn’t count an apparent nose job early in her career.


But she might go under the knife in the future, perhaps when she reaches age 50, she implies. 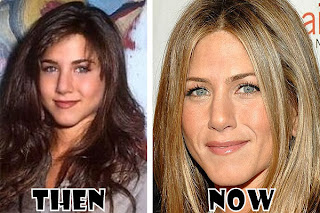 “There is an extreme pressure on women and men to just stay young and unfortunately men and women don’t see it to grow old gracefully,” she stated in a recent interview.

“A lot of women go too far and end up looking a hell of a lot older than they actually are and it sort of has a reverse effect. So talk to me in 10 years,” she confessed.
A year ago, she said much the same.

Asked at age 41 whether she would use Botox, she told an interviewer for the British edition of Harper’s Bazaar, “I could do it. … These lines are getting deeper every day.” 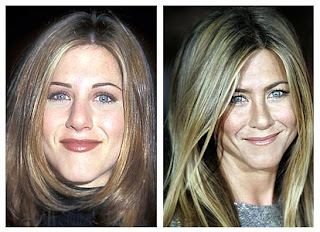 A year before that, she claimed “I will never, ever say ‘never’ about anything. And I don’t think there’s anything wrong with making yourself feel better about how you look – although we’ve all seen how you can go too far with it.”

She has tried Botox, but didn’t like it.   “I make my living from my expressions, so it’s not a great thing to do,” she insisted. 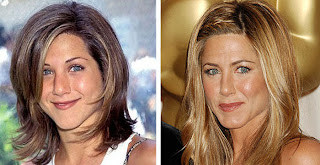 The actress admitted to rhinoplasty to corrected a deviated septum, then another nose job to correct the botched first procedure. She told People "I had (a deviated septum) fixed - best thing I ever did. I slept like a baby for the first time in years."  Many people say that it was not only a septoplasty but a full cosmetic procedure also, because of the changes in the shape of her nose.

The fact is that her nose looks very nice and natural after the procedure, it is more defined and thinner at the tip and it doesn't get the attention away of other factions of her face, which is one of the goals of a good nose job. 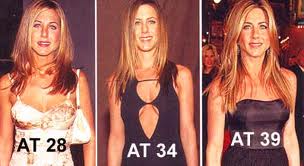 Needless to say that Aniston has been the subject of more rumors saying that she may had more procedures as an upper lip augmentation and botox injections on her forehead.  She had denied any more procedures done besides the nose on.