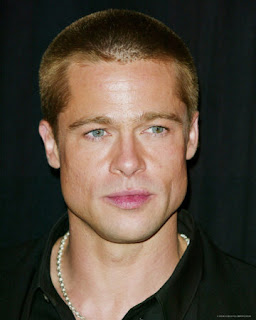 All I can simply say is that Brad Pitt is undeniably a very lucky guy gifted by super genes that allow him to hold on to his teenage hairline!
In spite of the fact that he is 48 years old (very hard to beleive!) , he doesn't need a hair transplant because judging by the pictures, I honestly cannot imagine that he has got a surgical hair restoration procedure. If it was, then Brad Pitt’s surgeon would have no more life. Every bald man in the world would want to be worked over by that guy!

Conclusion: I don’t think Brad Pitt got a hair transplant. Brad, much like Ozzy Osbourne, has the fortunate luck to have an enormous amount of hair at an advanced age. Perhaps Brad Pitt should donate his DNA to science as well. We might learn something useful from it...
And just for fun: How Brad would look if genetics weren’t so kind to him and he was stricken with some serious male pattern baldness? I bet that many people would wonder and especially men! (men's revenge!) 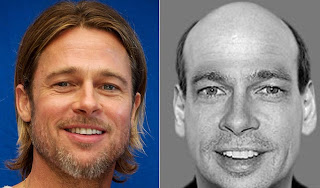 In the unlikely event that he does go bald, I strongly beleive that Brad would get a hair transplant. Or maybe Angelina suggest him to get one...But even bald Brad can't get ugly! What do you think?
Feel free to comment and share this blog post if you find it interesting!
Labels: Beauty Celebrities