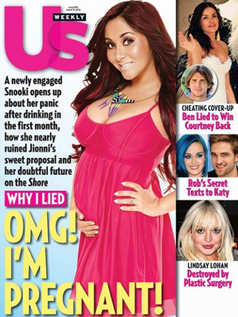 Poor Snooki, love her or hate her,when you are in the spotlight like she is, you have to feel kind of sorry for anyone whose pregnancy news is met with a series of jokes and snarky predictions about her future mothering skills.

It seems like everyone from Zach Braff ("Snooki is pregnant. I hope that fetus enjoys Jaegermeister.") to Joan Rivers ("My God, Snooki is pregnant! Even Rick Santorum wants her to abort.") has taken a below-the-belt dig at Snooki and her supposedly happy announcement in recent days.

Of course, Snooki's not really doing herself any favors with the jaw-dropping comments she shared about her pregnancy with Us Weekly. 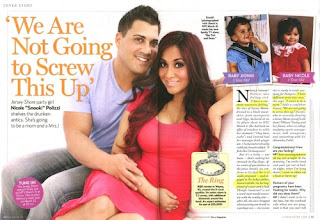 In her Us Weekly cover story,which is presumably the lucrative exclusive she was holding out for,Snooki reveals she's currently 15 weeks along, and engaged to the dad-to-be, Jionni LaValle. She explains that she denied the pregnancy beforehand because "the cardinal rule when you are pregnant is that you can’t tell anyone but your closest friends and family till after three months."
In typical Snooki form, she isn't exactly concerned about how she comes across in the interview, confessing that she and Jionni discovered about the pregnancy right after partying in Las Vegas over New Year’s and that her first thought was, "Shit, I've been drinking!" 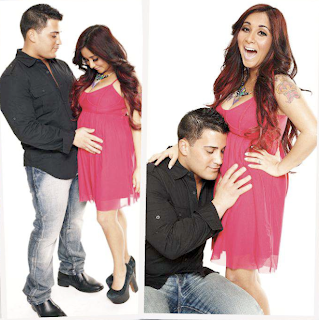 Honestly, that reminds me of Jessica Simpson's statement about finding out her pregnancy!Exactly the same reaction!
Snooki also claimed that the ultrasound made her baby "look like an alien," and I can completely understand that.Nothing weird eh? I mean, that first grainy black and white image is miraculous and amazing and all that happy stuff, but it's yes, definitely alien-esque. Or Skeletor, depending on the angle.
Her comment that's likely to be the most controversial, however, is that she fully plans on being drugged for the delivery. In fact, she went so far as to say, "Natural birth? Eff that!"

Now, I'm not saying I agree with her, but I have to admit, I kind of admire her sense of humor and bravery. I mean, we've become so incredibly opinionated and sensitive about birth choices lately, I can't even imagine the backlash she's going to get for saying she's entirely uninterested in a drug-free delivery.
What do you think of Snooki's comments over pregnancy?
Do you think she is not grateful for God's gift? How do you feel  about the way she faces this new phase in her life?
Feel free to comment and share this blog post if you find it interesting!
Labels: Celebrities Gossip