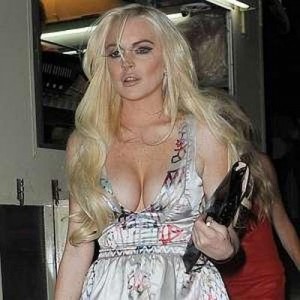 There is so much speculation about whether or not Lindsay Lohan had a boob job done. Countless blogs and plastic surgery sites have articles discussing Lindsay Lohan’s supposed breast augmentation. Did she or didn’t she?

The before & after pictures are certainly an indication (and I might say a "proof") that she actually had a procedure. But she denies it. To be more exact, in her GQ magazine interview she insists her breasts are real: "I like my body and my breasts. And no, they’re not fake." 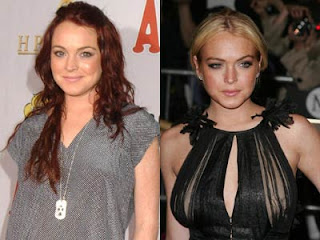 Lindsay attributed her sudden chest growth to genes!
But only plastic surgery could explain the miraculous expansion of her breasts by one or two cup sizes. Moreover, Lindsay’s razor-thin body is in striking opposition to her voluptuous breasts, suggesting this lack of proportion between her chest and body was achieved by cosmetic surgery. 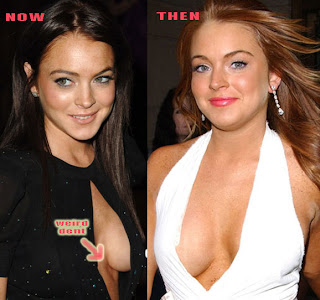 According to the Awfulplasticsurgery.com "The mystery of Lindsay Lohan’s shrinking breasts has already been explored, but further revelations (courtsey of Lindsay’s stylist) show that not only do her breasts appear smaller, there is a small weird dent under one of her boobs (Does the other one have a dent? Maybe photos shot from the other side will surface.) Could the origins of this odd scarring be surgical in natural? Hmmmm.."

When women have breast implants there can tend to be noticeable indentations, or ripples, or other shapes in the breast that are clearly not natural. 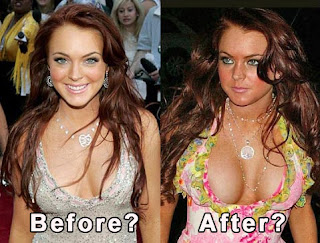 It is rumored that Lindsay had her first boob job when she turned 17. Some sources claim that Lohan subsequently had a second breast augmentation to improve her breasts and achieve a more "natural" look. Responding to these rumors, Lindsay replied that she was a late bloomer who happened to develop her chest at 17.

"I developed very late in high school. When I was 16, I still had baby fat. I didn’t get my chest until I was 17, so that made me feel insecure. I used to feel like I had to stuff my bra," stated Lindsay Lohan in an interview with Cosmo Girl. 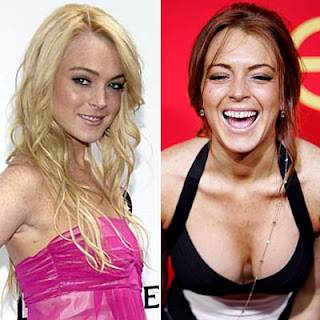 While it is normal for adolescents to develop their breasts in their late teens, Lindsay’s ballooning from complete flat territory to her current breast size of generous 34C seems unlikely without going under the knife. Real or fake, Lindsay’s boob job looks convincingly natural and had she not been a celebrity whose every move is caught on camera, only the trained eye would guess that her breasts are implants.
By taking a look at the pic  below, it appears that Lindsay Lohan's boobs are looking MASSIVE! It has to be added that Lindsay doesn't even wear a bra! 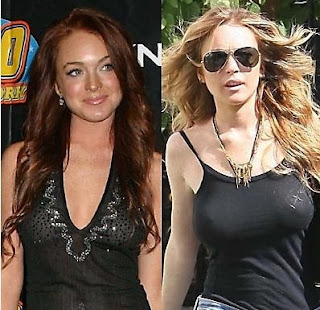 So, the question is: Did Lindsay have a boob job?
What do you think?
Feel free to comment and share this blog post if you find it interesting!
Photos taken from awfulplasticsurgery.com, findmysurgeon.com,
celebquestion.com, hollywooddame.com
Labels: Beauty Lindsay Lohan