Demi Moore Before And After 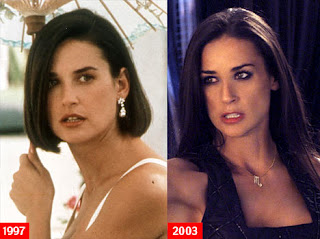 Demi Moore is rumored to have spent over $120,000 on plastic surgery over the years and over $330,000 on diet and fitness routines, including nutritionist, personal trainer, yoga instructor and kick-boxing champion.

Demi Moore has had a breast augmentation in 1996 for the film "Striptease", only to remove them subsequently and get a breast lift. Additionally, Demi Moore is rumored to have had liposuction to her hips, stomach, and inner and outer hips, a brow lift, numerous Botox injections and chemical peels, and teeth veneers. 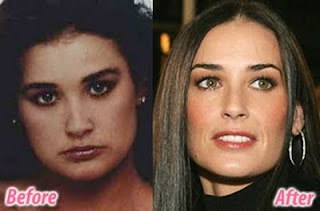 The truth is that since her rise to fame in the 1980s, Demi Moore hasn’t changed a bit. Her eternal youth has made many assume plastic surgery is at play. On the other hand, Demi denies all the plastic surgery claims. 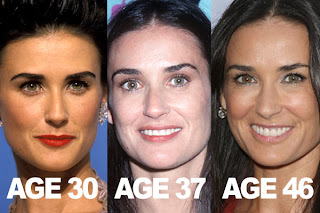 49 year old Demi told an interviewer that she has not been under the knife at all.


She is quoted as saying, "It’s completely false ! I’ve never had it done. I would never judge those who have."

"If it’s the best thing for them, then I don’t see a problem."

"On the other hand, I don’t like the idea of having an operation to hold up the ageing process : it’s a way to combat your neurosis. The scalpel won’t make you happy." 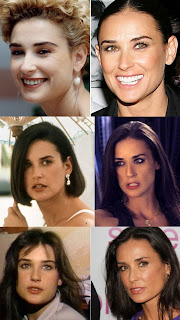 "That said, the day when I start crying when I look at myself in the mirror might be the day when I’m less adamant about not having it done."

"For the moment I prefer to be a beautiful woman of my age than try desperately to look 30."

Many plastic surgery sites and blogs beleive that Demi is stretching the truth.To be more exact, on his blog, plastic surgeon Dr. John Di Saia asserts, "Demi Moore looks great and plastic surgery has been involved. The last time she had any I don’t know, but she has flirted with the knife. She denied it recently. I figure that she was misquoted." 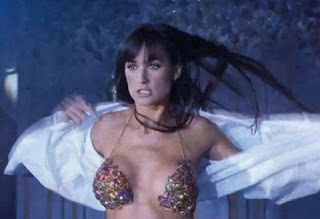 His opinion is backed up by plastic surgeon Dr. Anthony Youn, who states on his blog, "The lady doth protest too much, me think." 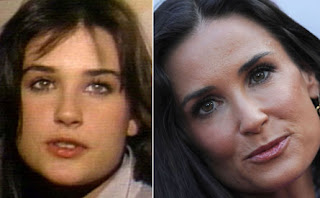 And what's Demi’s response to all those blogs and experts that doubt her plastic surgery claims? Via Twitter, Demi stated, "All this garbage that came out today about me is nothing more than an effort to diminish not just me but all women. Diminishing us by continually measuring women based on how we look. Or dont look. Creating comparisons instead of connections Say no 2 that!" 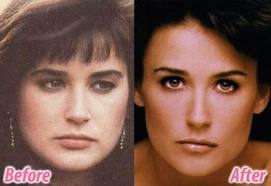 Now 49 years old, Demi looks undeniably better than ever. She has attributed her recently rejuvenated appearance to unnamed expensive products as well as natural therapies, including leech therapy and some nameless treatments... But a close source to Demi made the following statement to Star Magazine:


"Demi is obsessed with her looks. She’ll do anything to keep herself looking young." 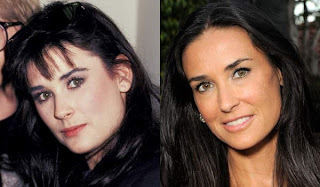 Plastic surgeon Dr. Jennifer Walden stated about Demi’s cosmetic procedures, past and present, "Demi Moore looks fantastic for her age. It seems that she has undergone breast augmentation, liposuction of the thighs possibly, Botox, a great skin care program with perhaps some resurfacing like peels or laser, and at this point maybe even a mini-facelift. She’s a machine, more power to her." 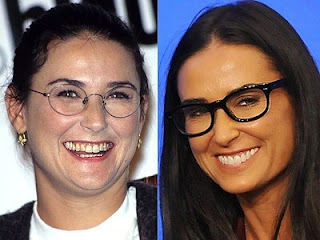 After looking at pictures of Demi before and after her "leech therapy," plastic surgeon Dr. Paul Nassif agrees that Demi may have been filled out a little. 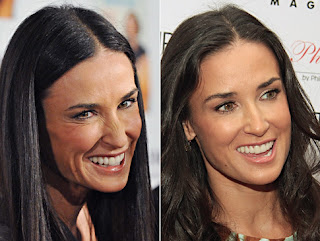 Dr. Paul Nassif claims: "Demi is smiling in the after photo, making it difficult for me to tell, but her cheeks do look a little plumper."

It has to be mentioned that often, after a facelift, the patient will want to keep up the refreshed look, usually by having Botox as well as facial fillers injected into areas. 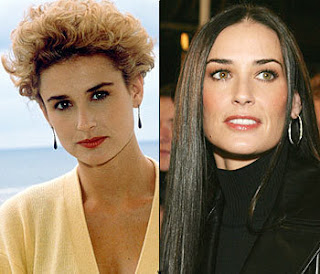 Moore shows no signs of aging on her face, which is free from lines and wrinkles on her forehead, no jowls or slackness on her jaw, and a perfectly taut and tight neck. But we should consider that her fresh face is attributed to a brow lift, numerous Botox or Restylane/Juvederm injections, potential laser or chemical peels, and a possible mini lower facelift that has helped her neck and lower face stand the test of time. 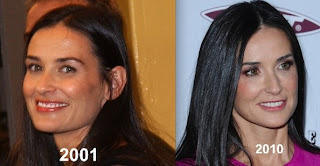 In conclusion: Demi Moore’s Plastic Surgery Expenses according to the"Daily Mail" are the following:

3. Subsequent operation to reduce her breast implants and have a breast lift - $19,000 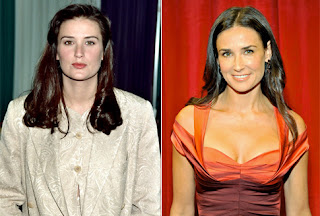 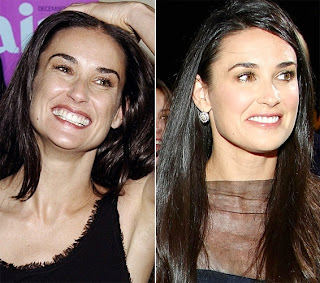 According to the Daily Mail, Demi has reportedly been unhappy with how her knees looked and recently had them surgically altered. Here is their story: 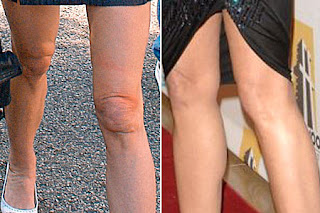 Despite her enviable figure, Demi Moore, 49, always had one or two things she wanted to hide away : her knees.

After her flaw was pointed out to her, the mother of three,who is very conscious that actor husband Ashton Kutcher is 15 years younger than her , asked her plastic surgeon to see what he can do. 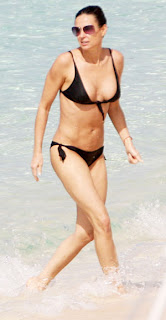 "Demi went to Brian Novack, who has already done work on her," a source close to the actress revealed. "He is a fantastic surgeon and his clients don’t look like they’ve had surgery. Demi couldn’t stand it that there was any part of her that is not perfect. She is also sensitive about her age, although Ashton has told her a million times he doesn’t care about what she looks like because he loves her. A lot of her friends were trying to talk her out of having more surgery. Worrying about her knees, of all things, is just silly. She’s lucky that’s the only part of her left to sag!"

Knees are one of the hardest areas of the body to have done because there is nowhere to conceal the scarring.

"If you cut away skin there is going to be scarring," said plastic surgeon Alex Karidis of the Hospital of St John and St Elizabeth in North London. "If you have a neck lift you can hide the scarring behind the ear, but the knees are one of the most exposed areas of the body.I would always advise my clients against having knee surgery because it is impossible to hide. And even though the scarring might not be as bad as the sagging, it will be a telltale sign that you have had surgery."

What do you think of Demi's plastic surgery procedures?
Do you beleive that she didn't go under the knife?
The thing is: Even if you want to have the plastic surgeries that Demi had over the years can you afford it?
One thing is for sure: Demi is a perfectionist and that is why she looks so stunning!